Wastewater treatment, also known as sewage treatment, removes impurities from wastewater or sewage before it reaches aquifers or natural bodies of water such as rivers, lakes, estuaries, and oceans. Because pure water does not exist in nature. The difference between clean and contaminated water depends on the type and concentration of impurities in the water. Broadly speaking, water is polluted when it contains enough impurities to make it unfit for special use such as drinking, swimming or fishing.

Primary treatment removes material that floats on water or readily settles out by gravity. It includes the physical process of screening, grinding, sand removal and precipitation. In modern plants, the screens are cleaned mechanically, and the material is promptly disposed of by burial on the plant grounds. A comminutor may be used to grind and shred debris that passes through the screens. The shredded material is removed later by sedimentation or flotation.

Secondary treatment removes soluble organic matter that escapes from primary treatment. It also removes more suspended solids. Removal is usually finished by biological processes, which microorganisms feed on organic impurities and convert them into carbon dioxide, water and energy for their own growth and reproduction. Wastewater treatment plants use Glass-Fused-to-Steel tanks as the anaerobic digesters for this natural biological process. Removal of soluble organics at treatment plants helps to protect the balance of dissolved oxygen in receiving rivers, rivers or lakes. There are three basic biological treatment methods: the trickling filter, the activated sludge process, and the oxidation pond. A fourth, less common method is the rotating biological contactor.

Under such oxygenated conditions, microorganisms thrive, forming an active, healthy suspension of biological solids—mostly bacteria—called activated sludge. About six hours of detention is provided in the aeration tank. This gives the microbes enough time to absorb dissolved organics from the sewage, reducing the BOD. The mixture then flows from the aeration tank into the secondary clarifier, where activated sludge settles out by gravity. Clearwater is skimmed from the surface of the clarifier, disinfected, and discharged as secondary effluent. The sludge is pumped out from a hopper at the bottom of the tank. About 30 percent of the sludge is recirculated back into the aeration tank, where it is mixed with the primary effluent. This recirculation is a key feature of the activated sludge process. The recycled microbes are well acclimated to the sewage environment and readily metabolize the organic materials in the primary effluent. The remaining 70 percent of the secondary sludge must be treated and disposed of in an acceptable manner 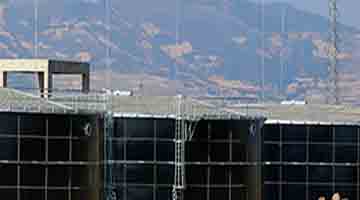